The City of Scottsbluff, Nebraska is located in the Great Plains region of the United States and has a population of just over 15,000 residents. Scottsbluff is the largest city in the Nebraska Panhandle and the 13th largest city in Nebraska. The City shares its borders with the City of Gering, and the City of Terrytown for a total population base of just under 24,000 residents. Scottsbluff is the retail hub of western Nebraska and eastern Wyoming offering abundant lodging, dining and shopping experiences.

Logistically, Scottsbluff is in the middle of everywhere with north, south, east and west access to U.S. and state highways connecting to Interstates 80 and 76. Denver, Colorado and Rapid City, South Dakota are within 200 miles of Scottsbluff, a short and scenic 3 hour drive. The local airport helps visitors and business travelers make a smooth, effortless connection to Denver International Airport. The City of Scottsbluff has taken a regional approach to economic development by embracing and following a strategic plan which is being implemented and followed closely. The City was instrumental in helping to coordinate and form the Western Nebraska Economic Development (WNED) organization involving many of the surrounding communities. Showing support financially to neighboring community and county projects in western Nebraska reinforces the City’s commitment to regional growth and prosperity.

The City works closely with the Nebraska Department of Economic Development when attracting new and growing existing businesses. Scottsbluff has an Economic Development Fund available for qualifying businesses that can be used to leverage state and federal dollars. Funding decisions are made by a local committee made up of visionary, local business leaders who are committed to growing and diversifying the regional economy – no project is too large or too small.

Scottsbluff is a safe, welcoming community with a vibrant downtown, a wide variety of housing opportunities, and a large selection of retail shopping choices from small boutiques to large brand name stores. The community offers many ethnic as well as traditional restaurants, sure to please the pallet. Monument Valley Pathway winds along the beautiful North Platte River, through the local zoo, and connects to the trail at the Scottsbluff National Monument. Walking, jogging, roller skates/boards/blades, and is handicap accessible.

Thousands of acres of public land in the region is made possible by Platte River Basin Environments (PRBE), a 501(c) (3) corporation formed by a group of sportsmen of western Nebraska concerned about deteriorating conditions of important wildlife habitat and the natural areas in the North Platte River Basin. PRBE has been able to open areas for public access to include hiking, biking, hunting, photography, bird watching, fishing, horseback riding, and other outdoor activities that encourage community participation and preservation of western Nebraska heritage while protecting and preserving wildlife and the area’s unique natural resources.

Scottsbluff is home to the main campus of a community college and career education is provided in a wide variety of subjects. The local High School is a state-of-the-art career academy offering students the opportunity to earn college credits in many of the courses and careers available. In addition to the high school, the Scottsbluff School District has one middle school and six neighborhood elementary schools, serving a total of more than 2,600 students.

The local hospital is a premier regional hospital and the area’s largest employer. It was recently named one of the Top 10 Rural & Community Hospitals in the United States and the only hospital in Nebraska to be named in the top 10 percent of the nation for patient safety and a five-star recipient for treatment of pulmonary embolism and pneumonia.

Nebraska’s largest industry is by far agriculture, and in western Nebraska, because of the semi-arid climate and wide seasonal and day-to-day temperature, two of the main production crops conducive to the area are sugar beets and dry edible beans, as evidenced by two of the value-added agricultural businesses.

The Scottsbluff area is commonly referred to as the “Sugar Valley” in reference to the growing and processing of sugar beets.  The local cooperative is made up of over 850 growers and shareholders who take pride in having a long family history in beet sugar.

Cost of Living in Scottsbluff, NE 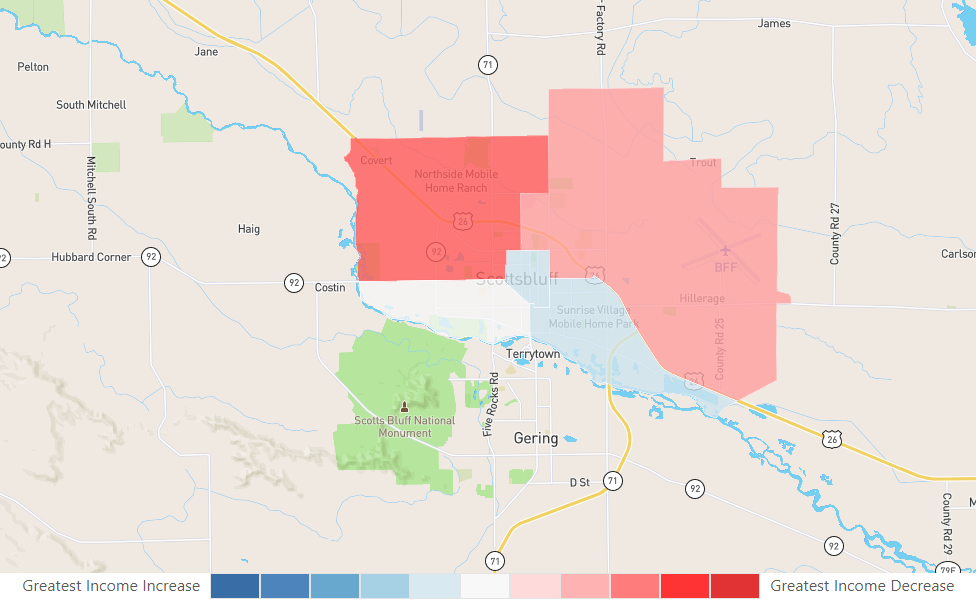 Unlike some cities, Scottsbluff isn’t mainly white-collar or blue-collar. Instead, the most prevalent occupations for people in Scottsbluff are a mix of both white- and blue-collar jobs. Overall, Scottsbluff is a city of sales and office workers, professionals, and service providers.

Scottsbluff is an extremely ethnically diverse city. The people who call Scottsbluff home describe themselves as belonging to a variety of racial and ethnic groups. The greatest number of Scottsbluff residents report their race to be White, followed by Native American. Scottsbluff also has a sizeable Hispanic population (people of Hispanic origin can be of any race). People of Hispanic or Latino origin account for 30.22% of the city’s residents. 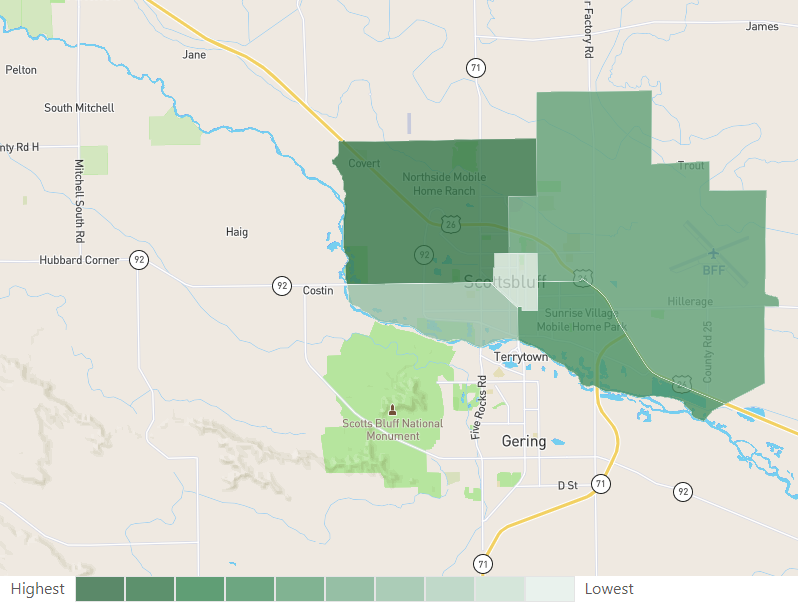 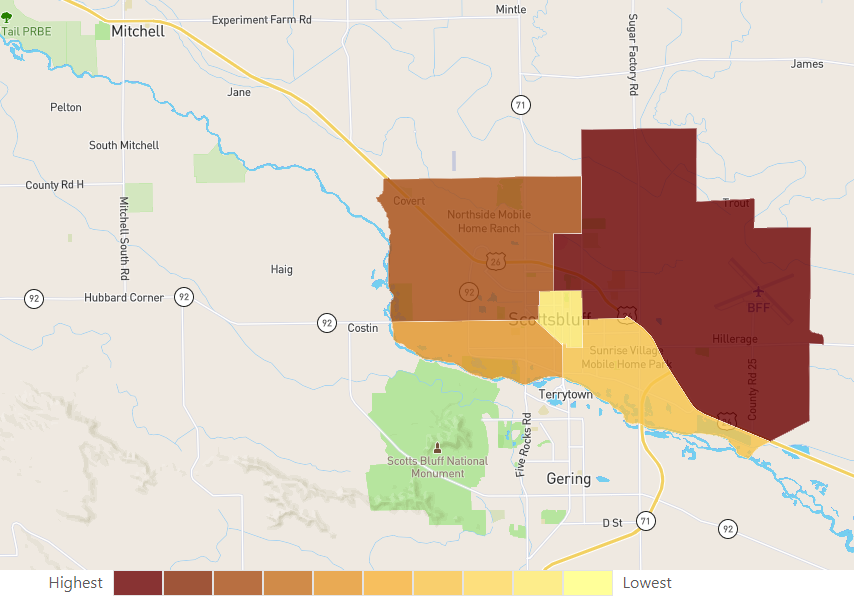 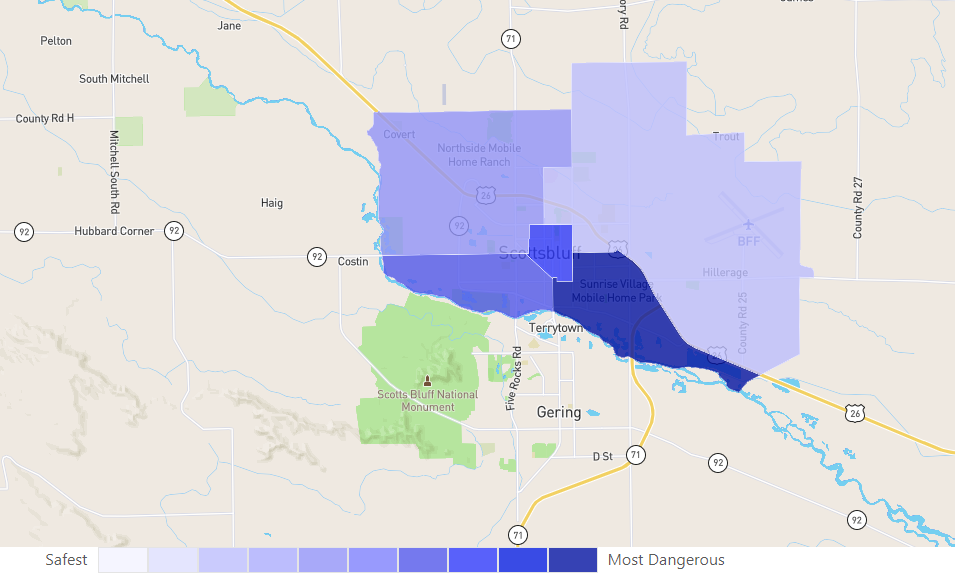 Chances of Violent Crime in Scottsbluff
1 in 270 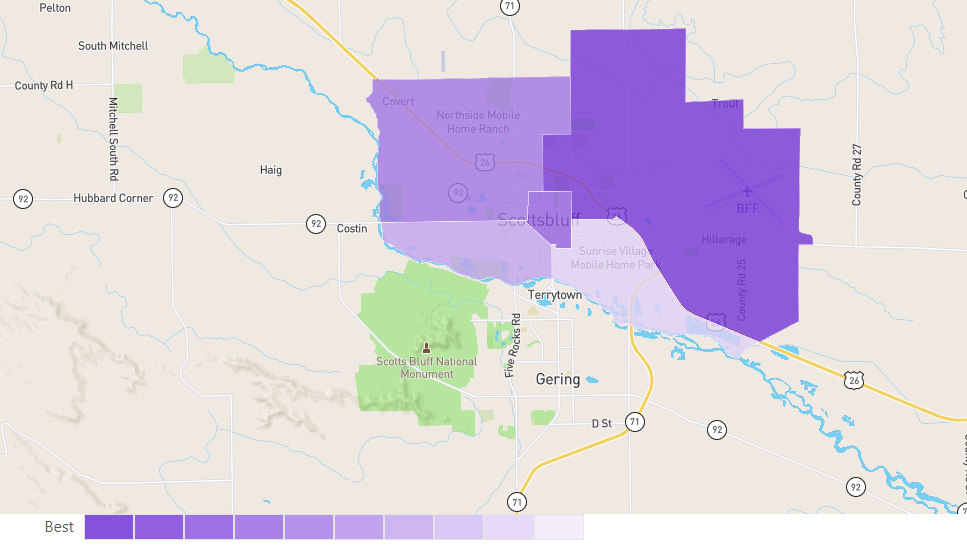 Scottsbluff Public Schools has 31 schools in the district, including preschool and early learning programs, four elementary schools, a middle school, and a high school.

Scottsbluff also has three private schools, all of which are religiously affiliated. The average acceptance rate across the three schools is 90%. The three schools offer classes for elementary school and some middle school: